Through the Action Plan for Safer Streets, Atlanta will more than triple its on-street protected bike network. By the end of 2021, Atlantans will see more than 20 miles of safer streets.

“A safe city starts with streets designed for everyone,” said Mayor Bottoms. “The way that people are getting around Atlanta is changing as the city grows quickly, and this plan will help keep pace with new demands across our transportation network.”

Building a safer and more equitable mobility network for Atlanta is a top priority of the Bottoms Administration and a pillar of her One Atlanta agenda. Mayor Bottoms has advanced the transportation agenda for all Atlantans by launching the creation of the city’s first dedicated Department of Transportation, by advancing the multi-billion dollar More MARTA expansion program, and by working to deliver more than $500 million in transportation infrastructure improvements from the 2015 Renew Atlanta Bond and 2016 Transportation Special Purpose Local Option Sales Tax (TSPLOST).

Traffic crash rates in Atlanta are four times higher than the Georgia statewide average on key streets in the city’s core, while pedestrian death rates from traffic collisions are twice the national average. While the introduction of e-scooters to Atlanta has generated more than 3 million trips since February 2019, they have also highlighted challenges with the existing mobility network.

“We have heard from residents of Atlanta loud and clear – people want safer streets, and they want to see real changes before another tragedy occurs,” said Mayor Bottoms

The Action Plan for Safer Streets will establish new connections between key neighborhoods across the city: SW Atlanta, the Westside Trail and MARTA; connect Midtown with Downtown; and bridge the distance from the West End to Grant Park. A map and a list of the corridors is detailed below.

The Plan will kick-off with Atlanta’s first-ever temporary, “pop up” bike lane as part of Biketober. This temporary lane will allow City transportation officials to track impacts in real time while engaging the public and following robust community engagement on potential designs.

In parallel to this plan, the City of Atlanta will be rewriting its e-scooter ordinance to make improvements to the administration and enforcement of operators. It is expected that the new regulations will be adopted in early 2020 bringing substantial improvements to the management of e-scooters across the City and addressing concerns raised by the public since the adoption of the City’s initial ordnance. 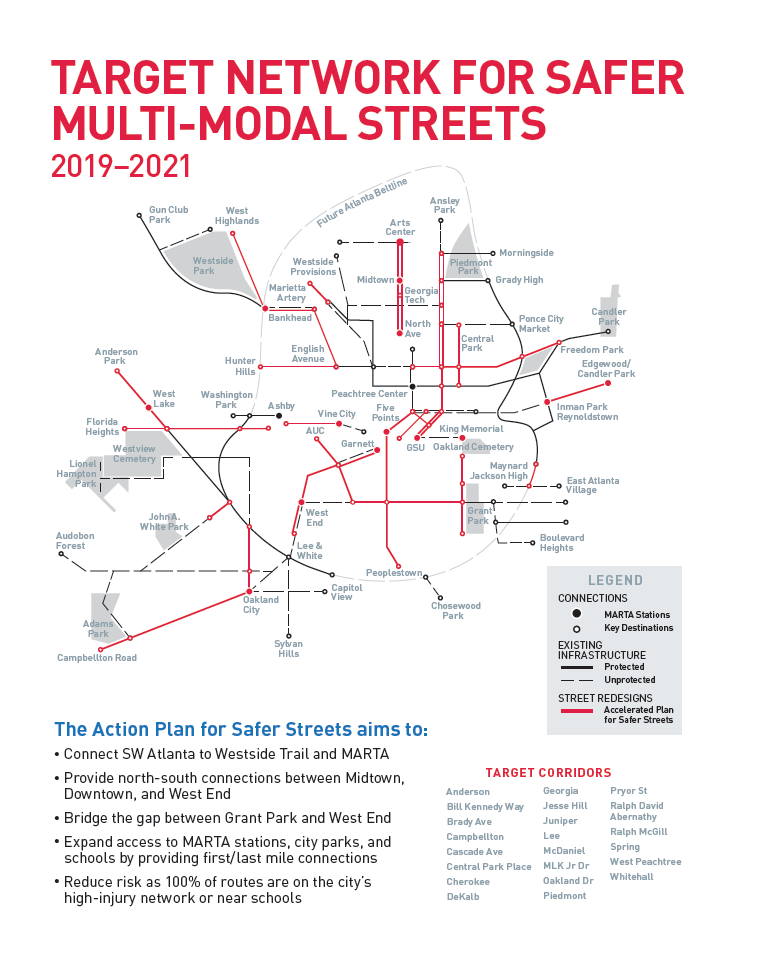