On July 30, 2008, President Bush signed into law the Housing and Economic Recovery Act of 2008 (HERA) to address the severe housing crisis. Title III of the Act appropriates $3.92 billion of grant funds under the Neighborhood Stabilization Program (NSP) for states and local governments to purchase and redevelop abandoned or foreclosed properties. The HERA directed the United States Department of Housing and Urban Development (HUD) to target funding to areas with the greatest needs based on the extent of foreclosures, sub-prime mortgages, and mortgage delinquencies and defaults. 100% of NSP1 funds must be obligated within 18 months and expended within (4) four years.

As funding recipients, city, county and state agencies must develop their own programs and funding priorities. However, they must use at least 25 percent of the funds appropriated for the purchase and redevelopment of abandoned or foreclosed homes or residential properties that will be used to house individuals or families whose incomes do not exceed 50 percent of the area median income. All activities funded by NSP must benefit low- and moderate-income persons whose income does not exceed 120 percent of area median income.

In distributing NSP funds, the City of Atlanta must give priority to those areas with the greatest need, which is defined by:

HUD has developed a foreclosure and abandonment risk score to assist grantees in targeting the areas of greatest need within their jurisdictions. The City of Atlanta will target NSP funds in those areas with an Abandonment & Risk Score of 8, 9, and 10. To download a copy of the map, please see "Other NSP & Foreclosure Resources" section below. 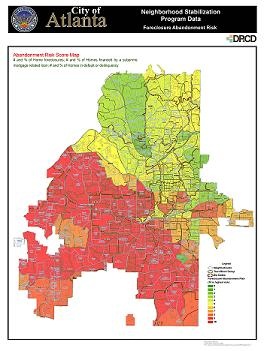 The City of Atlanta submitted an amendment to the 2008 Consolidated Plan to HUD on November 25, 2008 for the Neighborhood Stabilization Program and was awarded $12.3M on March 5, 2009. The Bureau of Housing issued a Request for Proposals for Affordable Housing Developers on February 2, 2009 and received 68 responses. The City awarded NSP funds to 14 Affordable Housing Developers on June 1 2009.

The City of Atlanta submitted an application for Neighborhood Stabiliation Direct Allocation Funding to DCA on January 15, 2009 and was awarded $3.9M on March 27, 2009. The City of Atlanta issued a Request for Letters of Intent for the DCA NSP funding on December 18, 2008 and received 37 responses. Six (6) of the letters of intent proposals were included in the application to DCA. The City awarded DCA NSP funds to five (5) Affordable Housing Developers on May 18, 2009.

Free viewers are required for some of the attached documents.
They can be downloaded by clicking on the icons below.