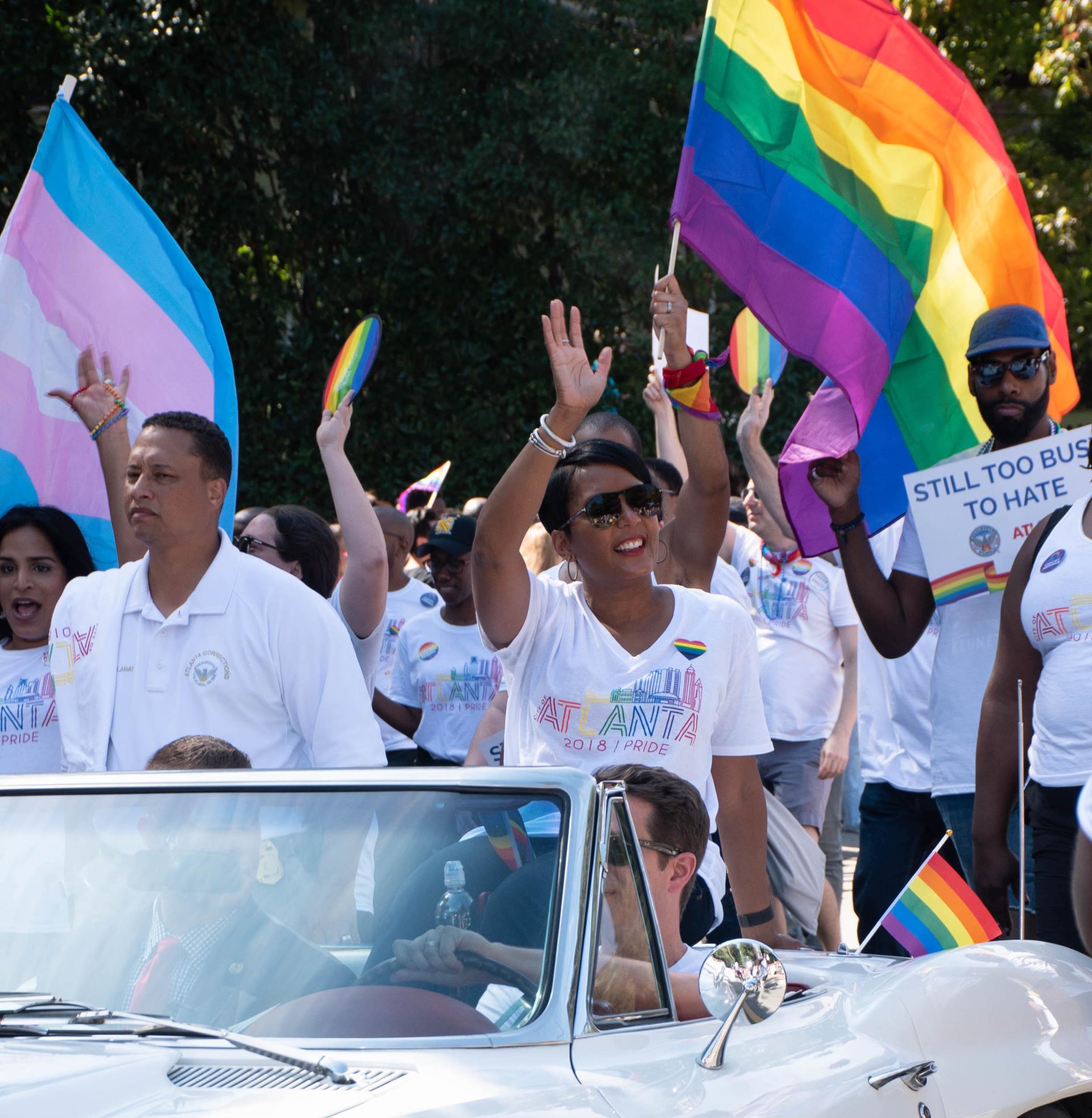 Mayor Keisha Lance Bottoms and the City of Atlanta are committed to the fair treatment of all Atlantans, including lesbian, gay, bisexual, trans and queer (LGBTQ) residents, workers and visitors. The LGBTQ capital of the South, we are proud that a diverse and thriving LGBTQ community chooses to call Atlanta home. We work hard to best serve all LGBTQ individuals who live, work, and play in Atlanta.

In addition to the many services and cultural opportunities available in Atlanta, from arts and culture to dining, nightlife, and community events, the City offers employment benefits tailored to the needs of its LGBTQ employees and has a comprehensive set of non-discrimination laws, which prohibit sexual orientation and gender identity discrimination by business establishments, by commercial housing agents, and by service providers in Atlanta. We were proud to install the permanent Rainbow Crosswalks (intersection of 10th St NE & Piedmont Ave NE) in 2017, dedicated in remembrance of the 49 LGBTQ+ lives lost in the horrific 2016 Pulse nightclub shooting.

Since 2013 Atlanta has had the proud distinction of having a perfect 100% score on the Human Rights Campaign’s Municipal Equality Index. In 2018, Atlanta also achieved MEI “All-Star” status—the only Georgia city to do so—for scoring above 85 despite being in a state with no LGBTQ-inclusive state-level protections. See our most recent results here.

Mayor Keisha Lance Bottoms appointed the City’s first full-time LGBTQ Affairs Coordinator in early 2018. The Coordinator works with City of Atlanta officials and the Mayor’s LGBTQ Advisory Board to better the LGBTQ community. 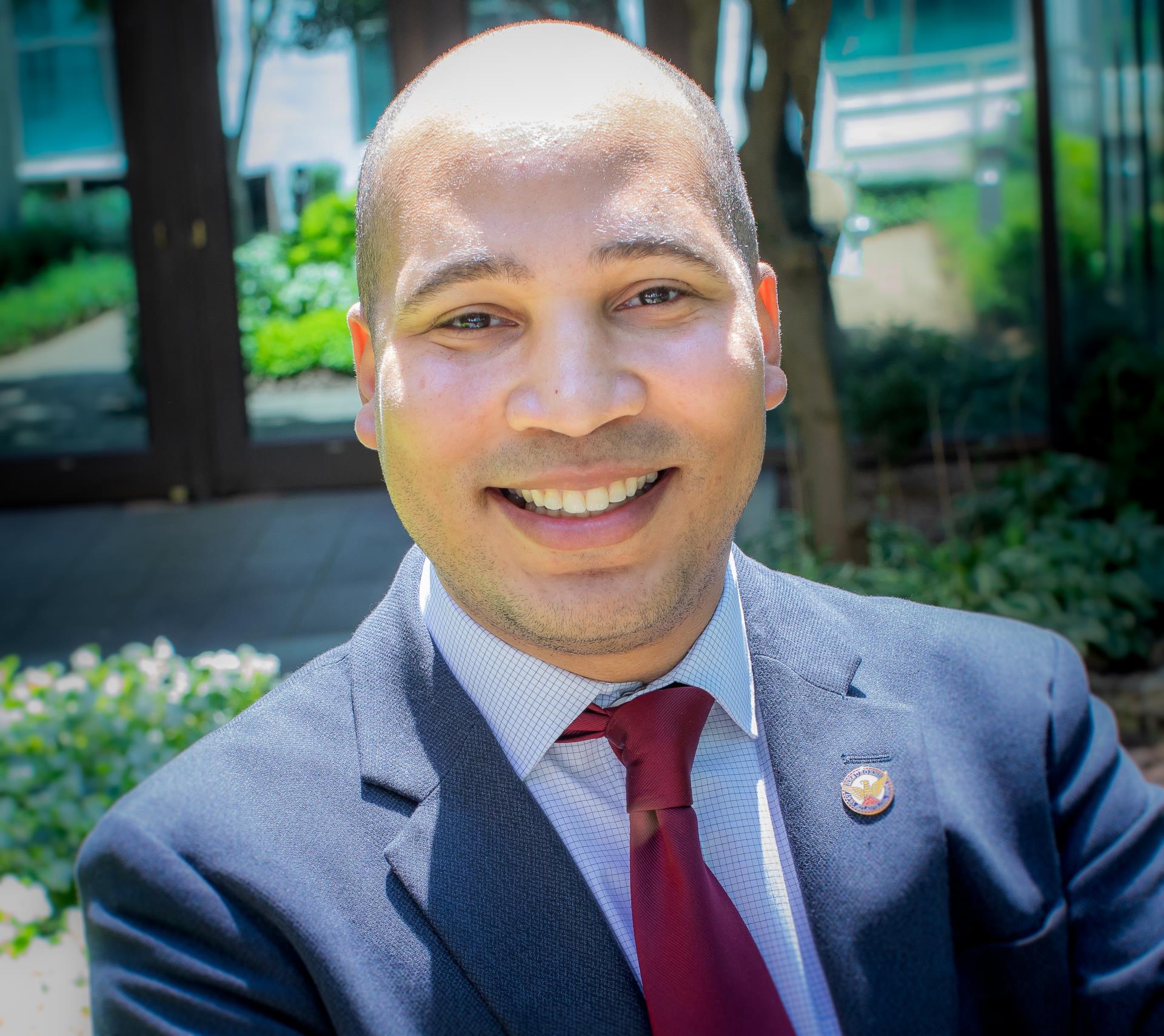 Mayor’s LGBTQ Advisory Board
The LGBTQ Advisory Board to Mayor Keisha Lance Bottoms is composed of citywide LGBTQ leaders and advocates.     The 34-member body makes recommendations to the Mayor that help shape the City’s policies and engagements with Atlanta’s LGBTQ communities. 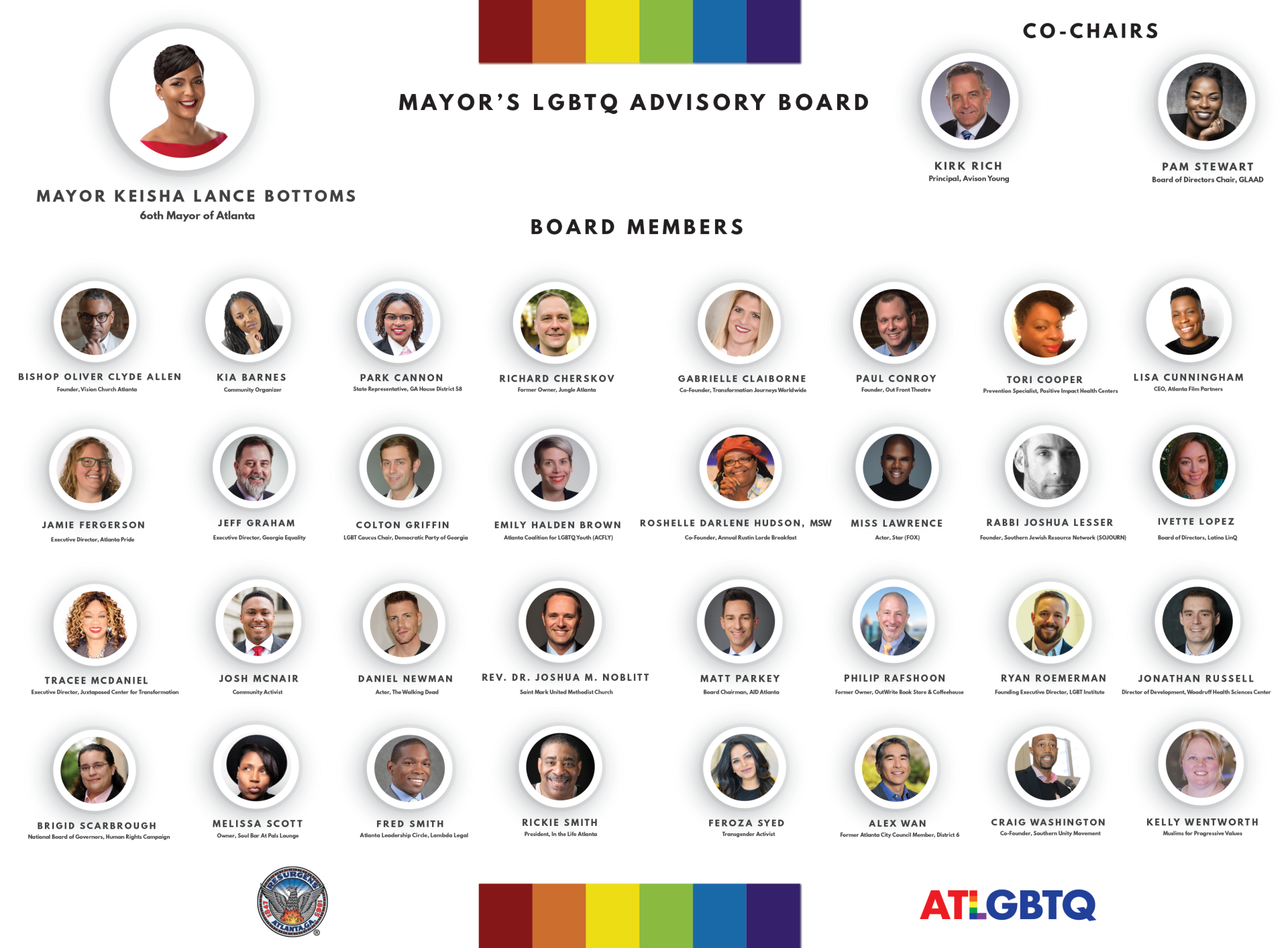 The Atlanta Police Department (APD), Atlanta Fire Rescue Department (AFRD) and Atlanta Department of Corrections all have LGBTQ Liaisons. The purpose of the LGBTQ Liaison roles is to strengthen the relationship between the LGBTQ community and the Department. By establishing an ongoing dialogue, the Liaison Unit hears directly from community members about concerns, works collaboratively with the community to identify solutions, and educates about recommended safety measures and available resources.

The City’s non-discrimination laws apply to a multitude of situations, including the following:

The City of Atlanta’s Human Relations Commission (HRC) investigates and hears complaints regarding discrimination, makes recommendations on how to resolve such complaints, and initiates activities in keeping with its mission. The HRC focuses its efforts on the elimination of discrimination in public accommodations, private employment and housing. Some of its functions are as follows:

To report acts of discrimination in public accommodations, private employment and housing, please fill out the Human Relations Commission Complaint Form and return it to the Mayor’s Office of Constituent Services.

Homeless shelters located in the City of Atlanta must provide services to individuals and families without regard to actual or perceived sexual orientation or gender identity. The LGBTQ 101 for Housing Shelters is a training manual that assists shelters with understanding and abiding by LGBTQ non-discrimination requirements. The manual was developed by the City of Atlanta, in conjunction with a team of religious and secular leaders who specialize in providing homeless and/or LGBTQ (Lesbian, Gay, Bisexual, Transgender, Queer) services. The Atlanta Human Relations Commission and Georgia Equality have transformed the manual into a training, which is being presented to emergency shelters across the City.